Fortunately, I visited on your behalf. 1

A video installation at Birmingham’s MAC, it’s a white box containing 360 degree panoramic images of interiors projected on the wall. They scroll, scrape and judder past with transitions between images that feel like a fight for supremacy between the wildly different spaces depicted. Plug your headphones in to one of the sockets on the surface of the wall and the sound you hear is the mediator/referee/commentator for the fight. A random combination of field recordings of empty spaces creates a soundscape that is used to control the brightness, rotation speed and transition parameters of the photographs. This averaged out soundscape becomes the lowest common denominator between physical space everywhere. A Normandy tool shed takes on Grand Central Station by projecting itself with noise. Environments previously imagined to be incomparable are not only held up against each other; the boundary between them is utterly destroyed as we glitch fade through the liminal space filled with the sound of the world banging into, whooshing past and running over itself.

Depending on which side of the Wigley line you stand on, this is either:

a) analogous to the Deleuze and Guattari refrain, explored through Proust and his descriptions of “…Vinteuil’s little phrases: they do not refer to a landscape; they carry and develop within themselves landscapes that do not exist on the outside.” 2;

b) the jaw clenching, cheek wobbling moment of brute force space/time bending that everybody’s favourite Hero, Hiro, goes through in an effort to chart his way clumsily through every single point in the universe simultaneously and travel mistakenly to a Normandy tool shed instead of Grand Central Station. 3 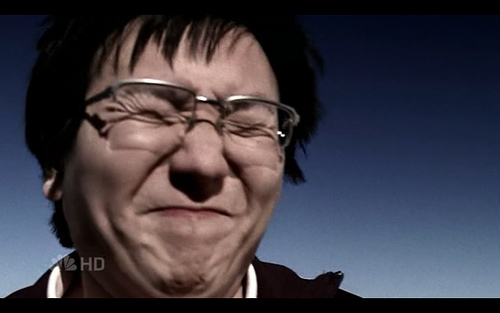 If you could see the look on my face right now you’d know which one I prefer.

Consider this part Deleuzian, part sci-fi influenced entry as a small offering to the crowds currently gathering at Storefront in New York for the Postopolis! event. Wish I was there!

Notes:
1. tip o’ the hat to D’log for pointing it out to me. D’log also notes that you can hear Schaefer talk about the project and see an example of the footage on this video: 10Mb mov)
2. A Thousand Plateaus, Deleuze and Guattari – Continuum Publishing 2004 – page 352
3. Hiro image via: OmarC

One response to “vacant space”