up on the roof 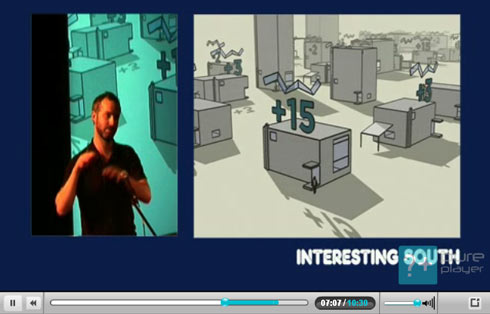 Home owners collate their energy use, export the stats to their neighbourhood’s Facebook group and then float the results out over the street with a hovering, illuminated super-graphic. You can imagine a community where street lights have been replaced with glowing balloons of green pride or red shame.

Dan’s request for input makes me recall the notes I took at last year’s Ecobuild conference:

Enter Carrera and his ‘City Knowledge’ project, which aims to ‘â€¦transform municipalities from hunter-gatherers into farmersâ€¦’, farming information about it’s energy uses throughout all it’s processes to build a constantly up to date database. Described in three moves, this takes you from,

which is costly to turn into

when it would have been better to have

Because at this point you get the reverse and the knowledge begins to demand a plan, creating new, unforeseen possibilities.

This was part of a presentation by Fabio Carrera about the work he was developing with Adrian Hewitt (of Merton Rule fame), following his PhD exploring the concept of City Knowledge:

City Knowledge leverages the dominant plan-demanded mode of data acquisition to gradually and inexpensively accumulate high-return data and to ensure sustainable, low-cost updates. It produces plan-ready information, by exploiting the self-serving and opportunistic pursuit of instant return-on-investment by frontline offices. Thanks to its emergent qualities, City Knowledge engenders unexpected plan-demanding situations, where the ability to conduct second-order analyses leads to deeper knowledge of our cities.

Carrera and Hewitt have begun to collate environmental data and combine it with GIS mapping. Following Carrera’s ‘middle-out’ model, this emanates from the municipal departments, rather than bottom-up people power or top-down government departments. Described in his 2004 dissertation thus (in a section seductively topped with references to both Lynch and Calvino):

With the advent of the web, a culture of interconnectedness and a certain familiarity with the concept of sharing through a distributed network of independent computers have created the right mindset upon which the City Knowledge concept of “middle-out” can now be grafted. Middle-out entails that each department will first and foremost take care of its needs, so that the primary functions that the department or office performs will be invariably performed with or without the connection to the outside world.

The City Lab department of WPI has been developing this middle out data farming in a number of fields, including the Local On-line Urban Information System (LOUIS).

It seems to me that LOUIS needs help to get out of the lab and into your living room. In Dan’s model, the middle-out municipal department is the aggregation of a community through web 2 social networking. The people become their own Ministry of Environmental Truth, with an attractive AJAX interface, freely accessible API for iPhone toaster control apps and a folksonomic tagging system for all the white goods.

These two approaches should get together for a meetup. Tom Carden should be invited. Carrera seems to have dabbled with web 2 ideas, but the trail disappears after a single blog entry and solitary del.icio.us bookmark – perhaps he’s moved onto web 3.

Final proof that these were two paths destined to cross eventually: Carrera’s City Lab has its own City Sounds project

Elsewhere, Matt Webb – characteristically ahead of the game – announces his sustainability score to the neighbourhood by burning tyres on the roof.

One response to “up on the roof”