Lifetime homes for all

This morning’s Today program brought the news that Help the Aged’s campaign to bring Lifetime Homes standards to all new properties appears to have made some progress:

Ministers want all new homes to include 16 features such as stairs wide enough for stairlifts, downstairs bathrooms, and room for wheelchairs to turn.

The government wants the standards to be adopted from April. If not taken up, they could become compulsory in 2013.

Lifetime Homes is a set of guidelines created by the Joseph Rowntree Foundation in the early 90s. The goal is to ensure that your house could be easily adapted to meet your changing needs as you get older or suffer from an accident or illness that causes disability, or both. Here’s a diagram from the Joseph Rowntree site that shows the 16 recommendations: 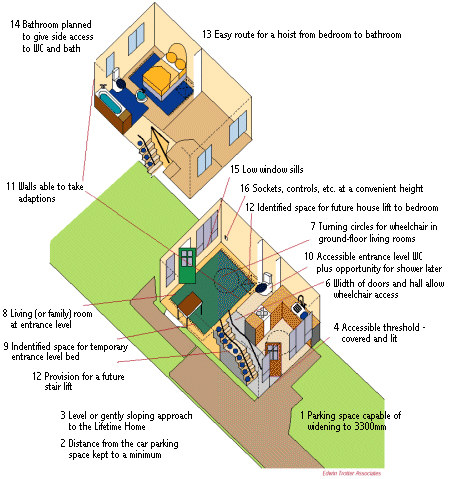 Social housing for rent has demanded this system is applied for a number of years. Here in Birmingham, the council went a step further when it first came out and made it a planning requirement for any affordable scheme.

The 16 steps were also covered by Mark Brinkley over at House 2.0 a few weeks ago and this post is really an expansion of my comments there. Keeping up the good work as usual, he has also caught this morning’s report and points out the somewhat predictable lack of joined up thinking – Code For Sustainable Homes already covers it anyway.

So, which ever way you look at it, it would seem that you and I are destined to keep applying it. Most of these recommendations are a no-brainer and have little or no impact on the layout aspirations of a house, but there is a point where you move from 2 bed to 3 bed properties that can have frustrating consequences. Rule 10 – the ground floor WC – and rule 10a – the provision of space/drainage for a future shower – which comes into force on the larger property, often becomes the biggest hurdle to efficient, successful, elegant, economic floor planning.

There’s a good reason why a number of the recently published narrow terrace properties shown in the Architects’ Journal (18.10.07) are 2 bed properties. Frankly, it’s easier to do.

Enough of this, it’s beyond boring. Cutting edge interweb journalism talking about toilets for goodness sake. There are a couple of questions worth asking though.

What if making it easier to stay in your home throughout your life results in a static housing stock, making it even more difficult for first time buyers to get on the housing ladder because nobody is moving on from the smaller units. Should we be creating housing that encourages people to stay put for most of their life? A robust stock is arguably dependent on a combination of accommodation breadth and balanced level of churn.

That’s a discussion point over an individual lifetime, what about longer time periods? Of the many definitions of construction sustainability, one of my favourites is also about balance – balance between the heavy and the light, the durable and the ephemeral. One growing and shrinking, living and dying thanks to the ongoing, immovable support of the other.

To build successfully into and onto the landscape we need to think in geological timescales. Like this: 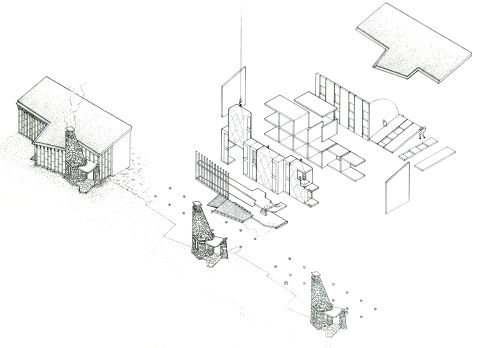 Alp Workers Settlements by Bird, Portchmouth and Russum from 1995, dragged from my memory of a wonderful lecture during my undergraduate course. Masonry chimney cores that stand for eons, watching the coming and going of the prefabricated lightweight homes over many, many lifetimes.

* In my defence, this was at least grammatically correct as I wrote the second half of this entry last year – more slow blogging. I’d like to blame the Panda I employ to proof read, but I fired him last week when he began to show signs of lethargy and ennui.

First prize to Avril for spotting the almost deliberate mistake. She wins a ride in my time machine.

3 responses to “Lifetime homes for all”