Despite booking my tickets late, the session on reducing carbon emissions in existing housing was one of the few that still had some places. A few days later, when the proceedings were kicked off by Alan Simpson MP, there were still some empty chairs. Perhaps, I twittered, refurbishment work just isn’t glamorous enough.

If that’s the case, then we’re all in much bigger trouble than we’ve been led to believe. The stats on carbon emissions from existing properties make the concern about new buildings seem positively futile.

Here’s a few notes from some of the presentations I found most useful at Earls Court a few weeks ago.

Sustainable cities – what we would do if we were serious
Alan Simpson MP, Chair, Parliamentary Warm Homes Group

Simpson proved to be a rare breed of politician; seemingly walking the walk as well as talking the talk, giving an excellent overview of the key issues and speaking knowledgeably about his own efforts to improve matters. Admitting that the current government simply wasn’t doing enough, he cutely announced himself as ‘…inline early for the next manifesto…’ rather than out of line with current policy. The remainder of his speech was largely informed by his admiration for German sustainability policies; citing inter-city competition for improvement, preferential rates on energy sold back to the grid and the resulting community empowerment that has grown to an extent that it is shielded from party politics. Even a regime change wouldn’t be enough to derail it.

Carbon trading? A mythical market with mythical benefits that only benefits the financial services industry. He pointed us to cheatneutral.com for a comparison. Expanding on the topic to look at food production and consumption cultures he talked about Cuba’s enforced self-sufficiency – if they can do it why can’t we?

Further anecdotes about Germany brought us to a summary that proclaimed the need for greater sharing of ideas between countries, which he eloquently summed up by quoting Edward Thompson’s description of ‘…cargo’s of intellectual contraband…’.

A rousing opening polemic delivered by a seasoned politician is a tough act to follow when you’re armed only with Powerpoint. Enter Ruyssevelt with the reassuring news that there is some good work being done in the refurb field already, despite the fact that Yvette Cooper suggests we should think about it for another 10 years before taking any action. (By which time the Pandas will almost certainly be dead – Ed.)

The importance of carbon emission reductions on existing stock was quickly demonstrated with the following graphs (taken from his slides, a version of which is available online here: The Built Environment is just that – BUILT!)

First, this one shows the reductions possible if we just spend the next 40 years just fiddling with new build: 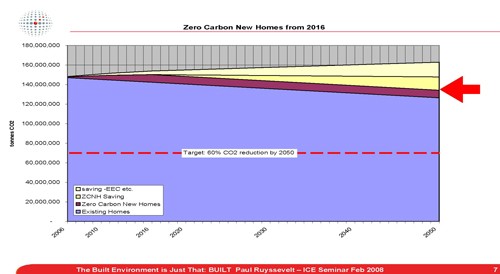 Next, we see the number of existing properties per year that we need to refurbish to reach the hoped for 60% reduction by 2050. 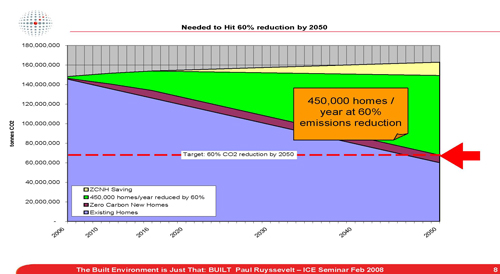 And here’s the rate per year we have to hit if we mooch about doing nothing with existing houses for the next 10 years as Yvette Cooper suggests. 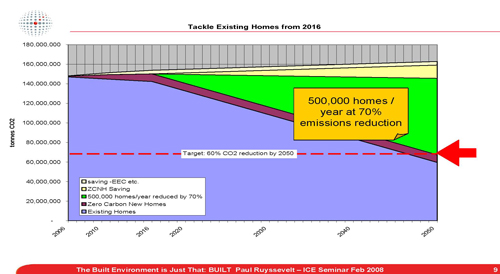 While we wait there are three main initiatives tackling housing refurb: Decent Homes, Warm Front and the Energy Efficient Committment. The level of change from these being perhaps best explained by highlighting that Decent Homes calls for only 50mm of insulation – a provision that Ruyssevelt prefers to call indecent.

Once again the Germans are doing it better with examples such as the KFW Housing Modernisation Grant. An example of a scheme benefitting from this is Freyastrasse in Mannheim: 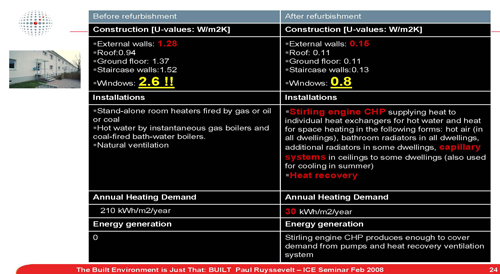 Having spent time looking for comparable precedents for my ecoterrace project, I was delighted to learn about the next few references.

Ruyssevelt encouraged us to get in touch with John Doggart from the Sustainable Energy Academy if we had a project that might be suited to his Old Home, Super Home project.

A network of exemplar energy efficient old dwellings, which are local and publicly accessible within 15 minutes to nearly everyone in the country. Making them accessible to the public helps homeowners and local authorities to get hands-on knowledge and be inspired to transform their own housing; we plan to have 1000 exemplars within 5 years, equivalent to one per Tesco.

I’ll certainly be offering ecoterrace.co.uk. Also, May this year will see the launch of the Existing Homes Alliance, which will be seeking to build up a database of best practice refurb examples. Ruyssevelt’s very informative talk finished with a slide that reassured me that our project could prove to valuable to the rest of the industry. Of the innovative refurb schemes he was aware of, how many were being monitored to assess their performance? 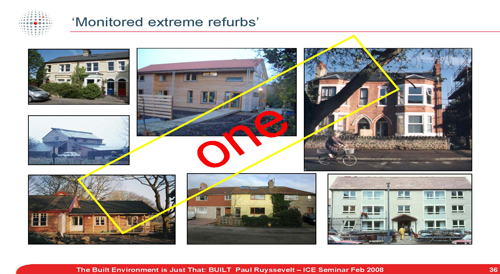 That dramatic action needs to be taken quickly to reduce carbon could hardly be argued, but as we listened to the discussion panel at the end of the session talk about the housing market and sustainable investment it seemed to me that something was missing from all the debates we’d heard. Spending the money on technologies like efficient boilers, solar panels and high levels of insulation may make for good carbon emission reductions, but does not result in an attractive, enjoyable place to live. Housing market renewal is equally dependent on the quality of the living environment delivering long term financial sustainability, than whether we get complete carbon emission neutrality.

In the midst of all the maths, graphs and scare stories I want to hear about housing that keeps its place in the market and continues to be desirable to buyers because of its design quality. Where’s the discussion about how to make our houses into better pieces of architecture?

One response to “Ecobuild 2008 notes”