Times are hard. Your credit is being crunched and there’s nothing you can do about it. Your value is being chamfered.

Open the door and run. Run like the wind. Jump. Jump up. Jump up, jump up and get down. Nobody can take that from us, it’ll always be ours. Everything else has gone to hell in a handbasket. Run, run free…. free run.

Dan Mathieson, Head of Sponsorship at Barclaycard, the title sponsor of the World Freerun Championships said: “Freerunning is an amazing sport and some of the moves executed by the top performers are truly breathtaking. For Barclaycard, the fluidity of movement that is at the very heart of free running has a clear parallel with the freedom that we give our customers through such innovations as contactless payments and travel with the Barclaycard OnePulse card. We’re proud to support the first of what we are sure will become major annual events”

This month saw the first Freerun World Championships in London and they were sponsored by Barclaycard. There’s little point dwelling on the obvious, soul crushing irony here; it’s just too depressing. Anyway, who am I to begrudge these guys the chance to go legit and pay the rent doing what they love most? Every form of human endeavour becomes a potential franchise in the end, right? Might as well embrace it before your sponsor goes belly up in the coming economic event horizon.

However, there’s no escaping the emptiness of the black boxes and railings in the video above. Surely free running has meaning and sense of purpose defined in part by the reinterpretation of the urban landscape? Or put another way, it looks a lot cooler with a good piece of architecture in the background. 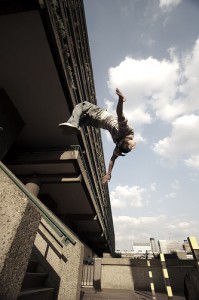 So, come on Barclaycard, how about next year you employ some architects to design the course? Or perhaps rebuild seminal spaces from urban topographies around the world. Take a vote from freerunners everywhere and then construct their favourite places on the other side of the world, allowing the locals to reap the benefits of your global reach without all that tedious mucking about with carbon spewing plane jouneys. See how the London boys take on the spaces of Manhattan, or let the New York team tackle urban Russia. You could even employ Richard O’Brian to present it.

Buy the Birmingham Library and turn it into the world centre for freerunning.

Because let’s face it, enlarged photos of shuttered concrete just doesn’t cut it. 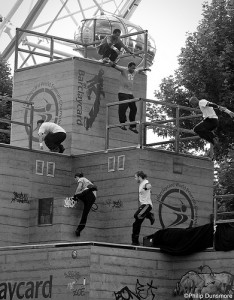