A long time ago I wrote a blog entry on the back of a paper bag. It was a review of a chapter from a Calvino book – the author who, as Kieran Long once twittered, architects always turn to when they want to appear arty and sensitive. At the risk of further proving that theory I can honestly say it remains one of the most satisfying posts I’ve ever written. Lately I’ve been trying to get our office to think about paper (and bags) more.

For most of the latter half of 2009 I was working on the city’s new housing development project, the Birmingham Municipal Housing Trust. Like many other local authorities around the country, Birmingham hurried to stake its claim for a share of the funding made available directly to local authorities for the first time in many years. Alongside another local practice we had 5 sites to take from nothing to a detailed planning submission in about 6 weeks. This is an insanely short amount of time. Weekly design team meetings with numerous departments ensued and the process was, to put it mildly, intense. Turning to others for moral support, encouragement and inspiration was an absolute must; as was the occasional bottle of Rioja.

Giles Lane helped by offering me a new notebook. Not the regulation issue Moleskine, almost as cliched as the Calvino reference, but a bespoke notebook just for us which we could make with our own bare hands. Giles and Proboscis have been using their Diffusion notebook format in consultation work and arts projects for some time. Printed (crucially) on single sided A4 the format is carefully designed to cut and fold quickly into a small, robust A6 book that can be either landscape or portrait.

Here’s a video showing how to fold one:

Diffusion eBooks from stml on Vimeo.

We made a blank one, experimenting with different templates to assist with writing and drawing and I carried it around in my jeans pocket for most of the 6 weeks, proving that the design is perfectly robust enough despite only being crafted from a few folds. What I’m most interested in though is what happens when it’s finished. I can unfold it, and because I can unfold it I can easily scan it in and share it with others or work over it again with other tools. Chunks of it would quickly get extracted and thrown into presentations to the client and ultimately some of the sketches informed the design and access statement that went with the planning application. That’s interesting; the ease and speed with which you can align the analogue with the digital. 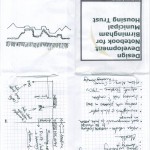 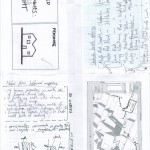 Then there was Owen Hatherley. I asked Owen to help me fill in the back story for the other team members and make sure we knew where we’d been before we decided where we wanted to go. He wrote a short essay on the history of municipal housing, talking us through projects such as Eric Lyon’s Span housing and Sheffield’s Gleadless Valley. Initially I gave it to Birmingham City Council in standard A4 format, but later when self-publishing a booklet became possible with Gile’s bookleteer.com I could create my own notebook, this time by uploading a PDF then getting it back immediately in the Diffusion format to fold and issue myself. You can download a copy yourself from the diffusion.org library. That’s interesting too, I self-published a book.

More recently, when the dust had settled and it came time to tell other people what we’ve been doing lately at the West Midlands Built Environment and Design Fair I published a newspaper in about 48 hours with the help of newspaperclub.co.uk. Like bookleteer.com, newspaperclub.co.uk connects a web interface to a production process but this time it gives you the power to command a newspaper printing facility usually reserved for massive print runs. You can upload a PDF of any design as long as it follows the template size or you can use the newpaperclub interface to upload text and images from your machine or source either from other locations on the web such as blog entries or flickr pages. I’ve rarely seen a web service in early beta stage nail the interface design so succesfully first time. It adjusts the 4 column layout and shows a clear snapshot each time you make an adjustment. I pulled in text from here at no2self.net and lifted images from my practice flickr account and turned out a 12 page newspaper in little more than an afternoon. 2 days and £120 later I had 100 beautiful objects to give away to clients and colleagues. We gave them out along with bookleteers by the staff in paper bags that had been rubber stamped with our logo. So it’s a useful PR tool and in the same way Moo mini-cards still do after all these years it’ll help me cause a stir in a generally conservative, predictable industry; but what else? What interests me most about tools like newspaperclub is how I might be able to connect it with the hyperlocal debate and the work a practice like ours does with neighbourhoods like Blurton in cities like Stoke on Trent. If I can plug the outputs from amateur community blogging quickly and cheaply into professional looking trusted formats like a newspaper then the credibility, the reach and the power of the voices being supported become reinforced. Not only that but you can leave it on a bus for someone else to read and you’re not likely to do that with an iPad.

Before you wrap your chips in it however, there’s something else you could do when you retrieve it from the bus. The bookleteer experience teaches the value of being able to easily send the paper format you produced with the digital tools back into pixels to be worked on again. There are more layers to be added, further annotation to be inserted and new ideas to be traced.

When I spoke about the blurtonvision.co.uk project at Be2camp Birmingham last year I finished by enthusing about the Walking Papers project created to allow people to annotate simple paper copies of their chosen section of Open Street Map. Once complete they can be scanned in again and traced over thanks to the QR code that aligns the analogue with the digital automatically. Self publishing formats like bookleteer and newspaperclub are perfect for this type of process, flipping constantly between screen and paper (and indeed the experiments at SXSW have begun to explore this), but what I’ve come to realise is that I need the process to take place at many scales. What I need is a walking papers process that works on a building scale.

This collaboration between paper and screen knows no limits. It won’t care about file formats and it couldn’t give a damn if you’re a Mac or that Windows 7 was your idea. There’ll be no more excuses for a lack of communication.

And I’ll be able to go back to writing on paper bags.

Of course back in the day, the oldest and wisest of us knew that instinctively.