Outside the window a machine scrapes the ground flat in preparation for the arrival of a crane. An engineer is marking the ground with laser-guided accuracy and tomorrow the timber frame structure will be lifted into place then bolted to the cross-hairs of yellow paint marked on the 12 cubes of concrete we’ve poured into the ground. 5 years on from the first decision to buy a plot of land and embark on a self-build project the house is now finally under way.

I’ve been charting the journey elsewhere on a tumblr page, sharing a mixture of links, quotes and sketches to convey some of the stages that the project has moved through, but it’s time I tried to summarise the decisions we’ve taken along the way and start to share more details.

The house is an experiment. An excuse to test out numerous materials and detailing ideas that I’ve been thinking about for some time. An experiment that I hope will result in an opportunity to take what I’ve learnt and repeat the most successful elements of it again for others, helping them to make better houses for less money. It’s also going to be my family’s home and if there’s a tension to this story, a latent risk growing in this narrative, it’s about whether some of those experiments will fail to deliver the home we decided to strive for 5 years ago. This seems wholly appropriate though as if there was ever a time to embrace some risk and uncertainty in one’s career as an architect, surely the self-build project is the time to do so. I’m going to share the project here and elsewhere using various tools, but first I’ll share some of the back story. Partly because it’ll be cathartic for me and partly because the full story infuses every part of the final building I’ll be constructing over the coming weeks.

The full story actually includes two houses. Before this house there was another house. An entirely different design that was forged during a time when both my family and the national economy were feeling a little braver and more care free. It was more ambitious in size, construction demands and most importantly funding expectations. We were committed to a self-build mortgage route and expecting to employ a main contractor to oversee it all. Whilst we worked out the funding route I spent months wallowing in the pleasure of being able to spend such a long period on early concepts, turning out alternatives week after week, folding and unfolding the volumes bound by the ground levels, neighbour’s house and laws of physics over and over again until I was sure I’d tried every permutation. There were pages full of diagrams in the sketchbook and seminal texts on the coffee table and it was a delight. 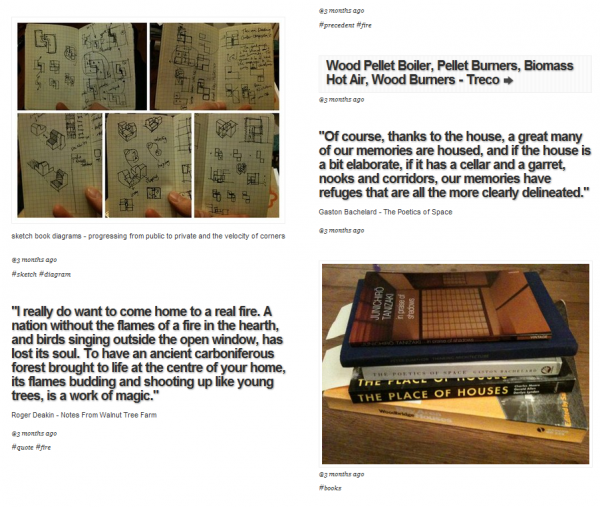 It was also tortuous. Endless variations on a theme with no external force able to come between the client and architect, the gap between them having closed entirely and the brief becoming as fluid as the pen strokes in every sketch. 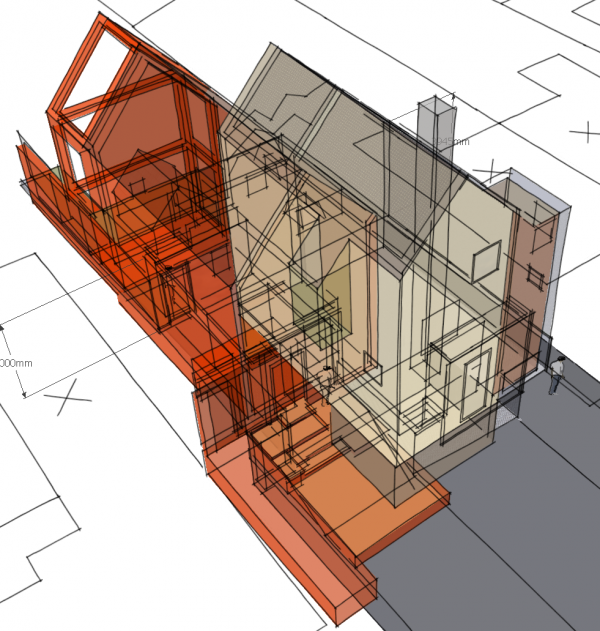 Then comes the blessed relief of a constraint you can cling on to. Mortgage paperwork, APR calculations related to energy performance and a cost estimate. You buckle down and find a solution in 3 sides of A4 paper.

I worked hard to get a planning approval. I suspect the local authority had never seen a design and access statement like it. We progressed towards construction information. I argued with the mortgage lender about what it costs to make a Passivhaus building and they sent a valuer round to ask questions such as whether there would be lead flashing on the chimney. The form he was filling out looked 30 years old. Meanwhile, the engineer and I spent months trying to work out how to stop an externally insulated basement slipping down a hill. I included a shed on the sedum roof just because frankly, every sedum roof should have one.

I pushed on with lots of BIM and lay awake at night worrying about whether the chiaroscuro was sufficiently nuanced and if the sun on an autumn afternoon would crawl across the south facing concrete exactly as I hoped. Hashtag: cliché.  All I had to do next was build it. 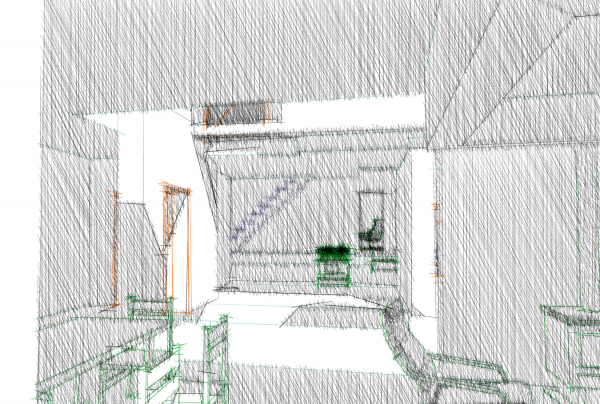 Then one winter evening we called a halt to it all. Life had changed and none of it made sense any longer. Sarah had been diagnosed with an illness that prevented her from continuing her career as a GP, our finances changed overnight and driving home from work listening to Radio 4 brought the sound of Cameron and Osborne driving our economy headlong over a cliff in the name of austerity. We woke up and told the kids the dream was over. The news brought unexpected responses from both of them. My 8 year old daughter confessed she preferred small cottages anyway, just as long as it included a decent chimney. My 10 year old son, pulling himself together and wiping the tears from his eyes, immediately grabbed a piece of paper and a pen and drew a picture. It showed the house broken down into smaller pieces, each believably within our reach a section at a time, yet ultimately combining to become something that might still result in the home we wanted. I’ve never been prouder. Finally I had a proper brief. 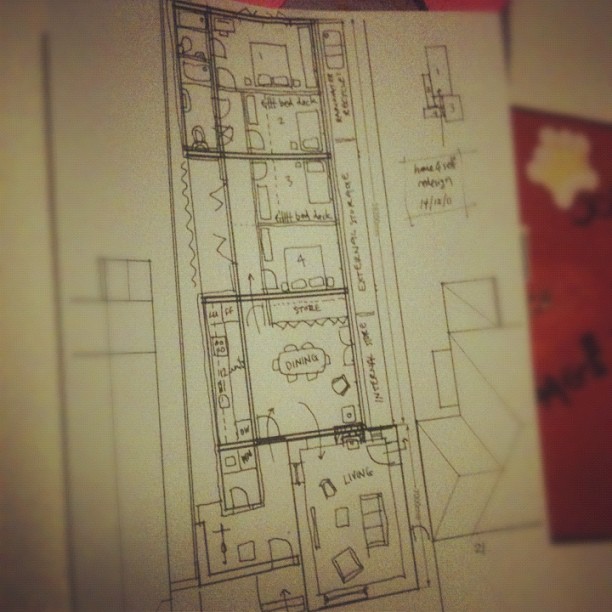 Liberated from the shackles of complete freedom, it was easy to embrace the new constraints. Slice the budget in half, respond to an illness that caused vertigo and made stairs a bad idea, work out how to procure it yourself – this was the new brief.

Standing on the shoulders of giants, I channelled Charles Moore’s three orders and I called on Walter Segal and his legacy of timber frame construction principles and combined it with the products of a local manufacturer of pre-fab cassette systems that I’d got to know over the last few years. 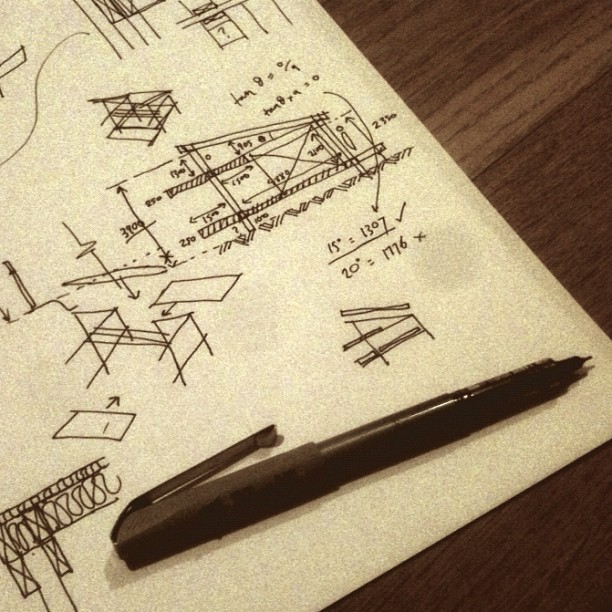 Frames between optimum span centres, posts on cheap foundations, an order of machines to organise the services, single storey living in an off-site manufactured villa. The revised planning application became a timber ark that we’d use to ride out the emotional flood. I lost my nerve at the last moment. In the face of growing doubt and learning how to deal with our new family life, I lost faith in the diagram and simplified it into a single structure with a single construction strategy. It was a mistake and the planning department, to their credit, knew it. 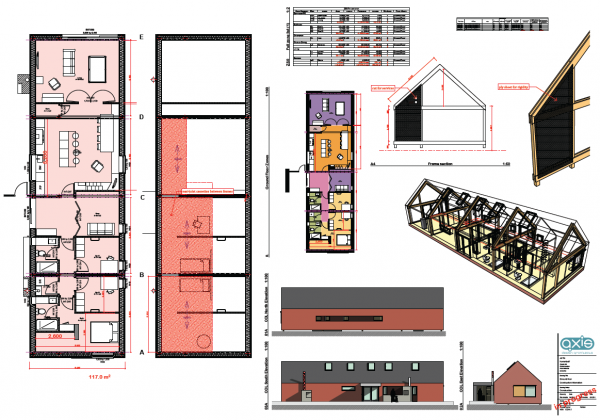 I quote: “We were disappointed by the new design, it looked like the work of a different architect and we wondered what had happened. We really liked the last proposal.”

It was good to know they liked the previous design at least. Not enough street presence was the feedback, a single storey structure with such simple elevation treatment just couldn’t cut it amongst the rest of the street. Could I make some of it two storeys? I had to acknowledge they were right. It looked like the author had been feeling downtrodden and sorry for himself and turned out a building to match. Which of course, he had.

An opportunity presented itself. This request for the addition of a two storey structure meant I could test the timber frame against something else. Throughout this period I’d been exploring ways to improve the performance of the affordable housing we make at Axis Design, specifically I’d been researching Passivhaus methods and developing detailing using thin joint masonry and natural materials. Two buildings, two materials and the option for two building phases should the finances demand it. The final redesign then became a split between two uses – sleeping and living. 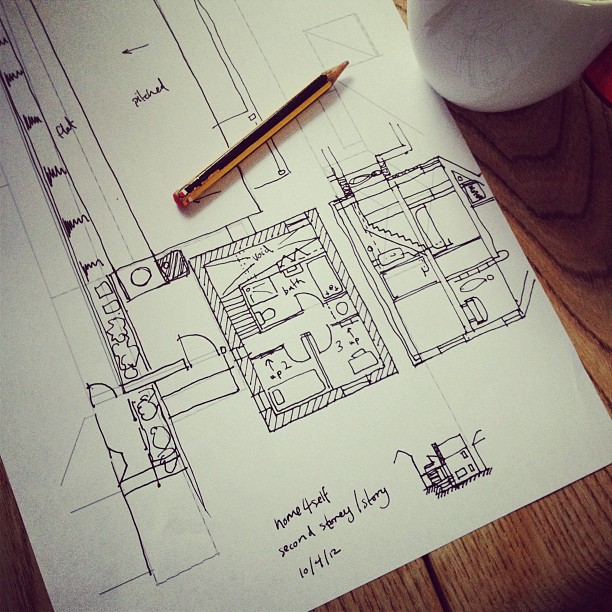 Two buildings connected by a service zone. An air-lock of carefully controlled mechanical and electrical inlets and outlets. The order of machines ultimately found its home nestled between the order of rooms and the order of dreams. I could connect up and commission the building on an independent trajectory to the other parts of the house, neatly allowing me to control the trades and procurement for this aspect as well as understand fully where the challenges lay in achieving the holy grail of energy efficient design: air-tight construction.

I resubmitted the planning application. 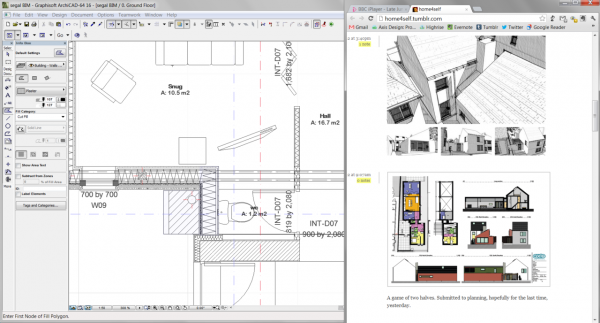 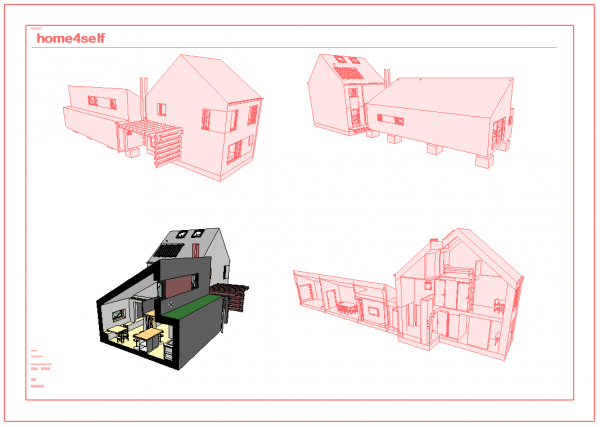 All I had to do now was build it.

A further year of discussions and sketches about timber construction, thermal bridges, vapour barriers, clay blocks and triple glazed windows has ended in a building that would at times make Walter Segal proud and at others have him rolling in his grave. Such multi-layered, competing constraints running through almost every aspect of the house makes this project much more than the formal gestures and diagrams that made up the early pages of my sketchbook. It’s a hard won series of compromises chiselled out of the coal face of contemporary housing in the 21st century and I’ve learnt to love it for exactly that. 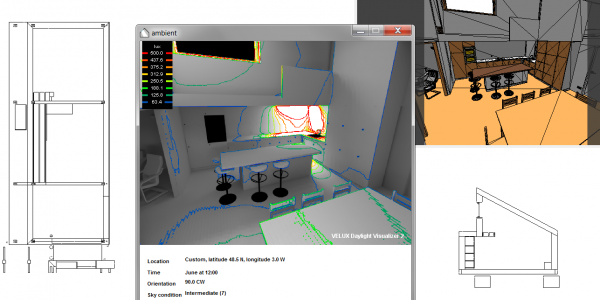 Alongside the seminal texts I’ve often cited on tumblr and twitter over the years I would add another to compliment the deviations I’ve made that will irk the purists so. Jeremy Till’s wonderful book ‘Architecture Depends’ has become a reassuring companion these last few months. In it he encourages the embracing of contingent dependencies as a mindful architectural praxis over the search for an independent (mindless) architectural form:

“My hunch is that architecture is the contingent discipline par excellence, and if we can deal with rather than deny that contingency, architecture may be seen as an exemplary form of transformative practice and lessons as to how to cope with contingency may be learned from its practice. But architects will deserve this attention only if they give up their delusions of autonomy and engage with others in their messy complex lives.”

Over the coming months I’ll be sharing what I can about the messy complex project that we’ve embarked on. There’ll be text and pictures at all the usual outlets and hopefully a few more unusual ones too, such as Little Printer, where you can get an alternative version of the story in a format more suited to the papernet and thermal printing. I did mention this was en experiment didn’t I?

3 responses to “the making of a home4self”