It would be great to find more examples of keynote speeches given in my profession that even came close to the care, rigour, sense of shared responsibility and warmth for fellow thinkers and practitioners as that found in Bethany Nowviskie’s talk on Digital Humanities in the Anthropocene. I suspect I’ll be digging around at the references and ideas for weeks.

Somewhere in there is mention of Donna Haraway and it reminded me of a reference to a talk I think I got from Adam Greenfield on twitter. I’ve watched most of it but the volume of ideas is too great to not be overwhelmed in one sitting. However, somewhere in there is mention of ‘speculative fabulation’, which sounded gorgeous, so I hunted for a source and bought the book. 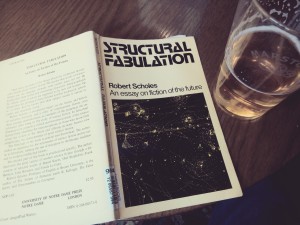 Note taking and head scratching for this year’s upcoming MArch studio at BCU is underway, so in the age old tradition of ‘blogging all dog-eared pages’ here are the choice samples from Robert Scholes’ ‘Structural Fabulation: An essay on fiction of the future’.

I’m hoping this will help a discussion that expands on last year’s exploration of infrastructure/design fiction. I’m particularly tweaked by the comparison between speculative and dogmatic fabulations as a metaphor for comparisons between the role of the architect versus other built environment fabulators. There are also moments that afford a rather neat loop back into thinking about the Anthropocene too.

(my emphasis in bold)

Fiction has always been characterized by its ability to perform two functions… We may call these two functions sublimation and cognition. As sublimation, fiction is a way of turning our concerns into a satisfying shape, a way of relieving anxiety, of making life bearable. In its cognitive function, fiction helps us to know ourselves and our existential situation.

All writing, all composition, is construction. We do not imitate the world, we construct versions of it. There is no mimesis, only poiesis. No recording. Only constructing.

All fiction contributes to cognition, then, by providing us with models that reveal the nature of reality by their very failure to coincide with it.

“To romance of the future may seem be indulgence in ungoverned speculation for the sake of the marvelous. Yet controlled imagination in this sphere can be very valuable exercise for minds bewildered about the present and its potentialities… But if such imaginative construction of possible futures should be at all potent, our imagination must be strictly disciplined. We must endeavour not to go beyond the bounds of possibility set by the particular state of culture within which we live.”

She has moved with the times and sees that the future is the only lever with which we can hope to nudge the present in a better direction.

Fabulation, then, is fiction that offers us a world clearly and radically discontinuous from the one we know, yet returns to confront that known world in some cognitive way.

There are two varieties of fabulation or didactic romance which corresponds roughly to the distinction between romances of religion and romances of science. We may call these two forms “dogmatic” and “speculative” fabulation, respectively… most didactic romances are clearly dominated by one tendency or the other.

A dogmatic fabulation:
…works out of a closed, anti-speculative system of belief. (e.g Dante’s Commedia)

A speculative fabulation:
…is a creature of humanism, associated from its origins with attitudes and values that have shaped the growth of science itself. (e.g. More’s Utopia)

In works of structural fabulation the tradition of speculative fiction is modified by an awareness of the universe as a system of systems, a structure of structures, and the insights of the past century of science are accepted as fictional points of departure. Yet structural fabulation is neither scientific in its methods nor a substitute for actual science. It is a fictional exploration of human situations made perceptible by the implications of recent science. Its favourite themes involve the impact of developments or revelations derived from the human or physical sciences upon the people who must live with those revelations or developments.

Man must create his future himself. History will not do it for him. And the steps he has already taken to modify the biosphere can be seen as limiting the future options of the human race. It is in this atmosphere that structural fabulation draws its breath, responding to these conditions of being, in the form of explorative narrative. The extrapolation may be bold and philosophical or cautious and sociological, but they must depart from from what we know and consider what we have due cause to hope and fear. Like all speculative fabulations they will take their origin in some project dislocation of our known existence, but their projections will be based on a contemporary apprehension of the biosphere as an ecosystem and the universe as a cosmosystem.

In the perfect structural fabulation, idea and story are so wedded as to afford us simultaneously the greatest pleasures that fiction provides: sublimation and cognition.

Seen in cultural terms, then, structural fabulation is a kind of narrative which is genuinely fictional but strongly influenced by modern science. It is specifically romantic in that it breaks, consciously and deliberately, with what we know and accept to be the case. But it develops its arbitrary parameters with a rigor of scientific method. Seen in purely formal terms, structural fabulation is a development of a tradition of speculative that has a long history in Western culture. This tradition is rooted in the genre of didactic romance, and can be seen as a dialectical antithesis of dogmatic fabulation. 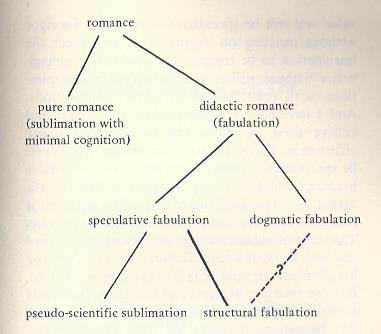 2 responses to “Notes from ‘Structural Fabulation: An essay on fiction of the future’”