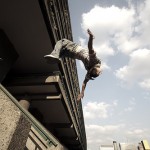 Hi honey, I’m home. Hard day at the office dear? Yes, it was a real grind… via MoBlogUK

Just me and an empty skate park. Getting up early has some benefits. A frontside noseblunt slide … is a long way off yet. This morning I focused on just staying on the board. Surprisingly, I had some success, well, most of the time – there was one incident that involved my knees meeting the […]

Back on the epee blade again at fencing last night. Not such a successful evening as previous weeks – lost both bouts. Took a few pictures with my phonecam of the coach using the sabre and swapped some via bluetooth with one of the guys at the club (the first two are mine, the third […]

Whilst I may be temporarily held back by the fact that I’ve misplaced the wheels I bought to finish building my skateboard; the next must-have purchase is already in my sights. The kids at the skate park on Penn Road won’t know what’s hit them when they see the sparks flying thanks to my TailViper. […]