You are browsing the search results for "books" 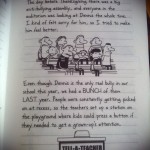 Youcanplan Pattern Books voting poster, originally uploaded by eversion. Can you spot my submission? Get voting from the 1st February.

Some more entries chosen from the archives. Influential ideas from people and pages… People Enthusiasm for tomorrow (RIP Tony Goodall) Memorial speech for my friend and mentor Concrete Ideas (Denys Lasdun) Chairs and the architects that sat in them Letters on meditation (Matt Webb) Learning how to let go Wayne Jacobs (Wayne Hemingway) Letter to […]

Treat this post as an advert. Yesterday I returned, for the first time in years, to a bookshop on Bath Street in Wolverhampton (in between the brewery and West Park). In the space of a few minutes I found three great books, purchased two and (being £1 short) had the third saved for me until […]