Proving that blogging can be a slow medium too, here’s the second part to an entry written almost a year ago…

December 2006, London, RIBA HQ. Flicking through the pages of the book to accompany the Eric Lyons exhibition at the RIBA, I send a text to Rod: In the RIBA cafe, muffins are terrible. A quaint, pre-twitter messaging technique that now seems obscenely intrusive.

Not all muffins you understand, just these ones, in that moment. Taking the edge off an otherwise enjoyable exhibition. Criticized in reviews, fairly I think, for being little more than a version of the book blown up and pasted on the wall, I was nevertheless glad I made the trip to see for myself. Sedate, linear, easy to follow, suburban even, I made the most of having the time to soak it up slowly; something that my parental duties usually prevent me from doing.

Colleagues had recommended I look at Lyons after I designed a project that reminded them of his work (see part 1). Pouring over the images on the wall I certainly had to (proudly) admit there were moments when we spoke in the same suburban dialect; the same vernacular language, but a direct reference didn’t jump out at me.

Until I opened the book. Muffin in one hand, page 30 in the other, I found the connection. 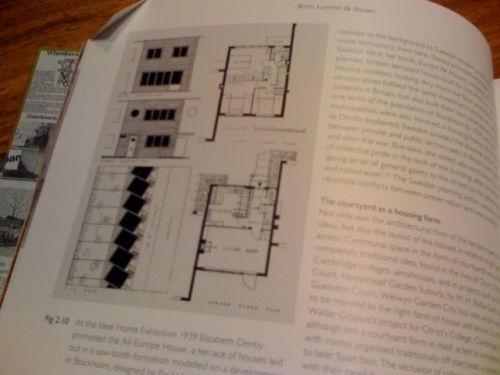 And, not for the first time, I had to admit that without the benefit of input from older, wiser colleagues I would have continued to believe that I’d reinvented the wheel. The image shown in the brilliant essay by Alan Powers is taken from a book published in 1938 called Europe Rehoused and is cited, along with the work of Trystan Edwards, as a likely influence on the young Lyons. Shades of it can perhaps be seen in the plans for New Ash Green or Templemere.

I wonder with increasing regularity, how often my peers, currently finding their feet in senior positions in offices across the UK are fortunate enough to be directed to moments like this. Helped, gently through the Total Persepective Vortex of housing design history and reminded of where we’ve come from.

Humbled and reassured I went back to the exhibition with Rod (and his camera) and before long we homed in on the drawings. All two of them. This is where the exhibition missed out, there simply wasn’t enough drawings. Surely there are piles of them in storage somewhere? 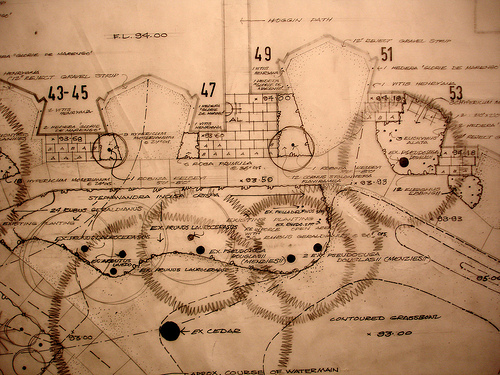 I’ve been thinking about this drawing and the importance of landscape to Lyons work ever since.

Continuing the theme of slow blogging, I offer it to Sue Thomas from Writing and the Digital Life as a possible answer to her question from December 2006: “How might one build a physical groupspace for work and leisure according to Web 2.0 principles?”

The answer is found in landscape. The communal spaces between the private thresholds of the Span houses engender social networking. There’s no need for me to expand on this further because, thanks to the unique way the BBC is funded, it’s already been written up for me. Look:

He placed three basic principles at the heart of the Span projects:

Many developments focus only on the creation of private domestic space – they treat the area beyond the front door as incidental.

But Eric Lyons turned this on its head. Each development found ways of building the homes around central or shared green spaces. The architect’s aim was to engineer a sense of community by forcing people to interact.

from the BBC article: A house like no other?

Could there be a relationship between the form of the media we are using and the wide ranging appeal of some of the sites that curate the analogous topic? Landscape, blogging, topography, delicious, geology, fffound, urbanity, flickr – medium and content seamlessly linked.

One response to “Architecture re-housed: Part 2”