Facing up, originally uploaded by eversion.

There’s something very satisfying about the way this building keeps facing you as you round the bend. Successfully enfronting the site I think Charles Moore would say. 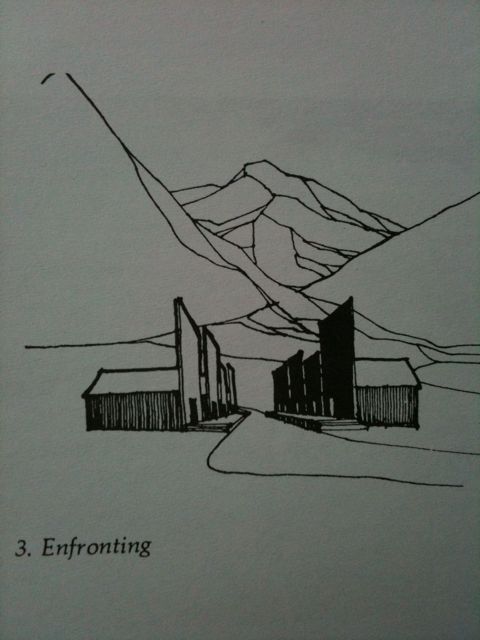 I should get this out of my system. It must be getting quite dull, all this relentless referencing to Charles Moore. I’ve been wallowing in it for over a year. Let me explain.

I’m building a house. I’m attempting to be both client and architect and it’s not easy living this split personality. So I’ve been turning to seminal texts for support – comfort blankets if you like – wrapping myself in them at night and sharing a bath with them occasionally.

You’ll know the books I speak of – Poetics of Space, In Praise of Shadows, The Place of Houses to name but a few. 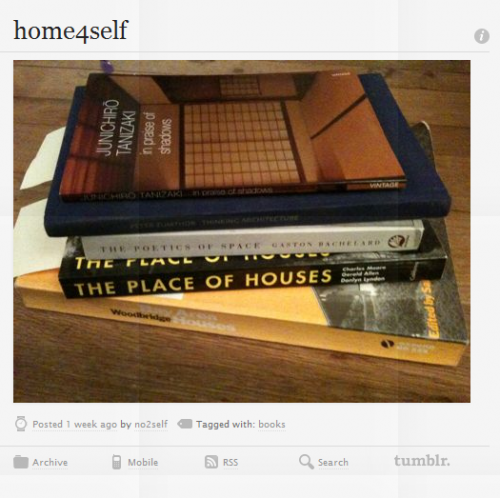 If you follow my twitter feed you’ll be heartily fed up with it by now. Elsewhere, more discretely, I’ve been noting stuff down for the last year and a half over at home4self.tumblr.com and over the festive season it finally started to fall into place. Gaston started talking to Charles, Junichiro got on better with Peter and the seeds of a home have begun to grow.

Of all the spirits I’ve called on though, it’s the ghost of Charles Moore that has been most supportive. The Place of Houses, written with Gerald Allen and Donlyn Lyndon is the best book on housing architecture I’ve got and the best book you should get. Its influence has been broad and many levelled; for example:

At Ecobuild last year I cited the ‘saddlebag’ technique in my talk about passive solar and it me helped explore the social/spatial benefits of the bolt-on, extra space that sunspaces provide. A buffer zone of many uses that breaks social housing out of its tight regulatory framework and minimum/maximum room sizes. 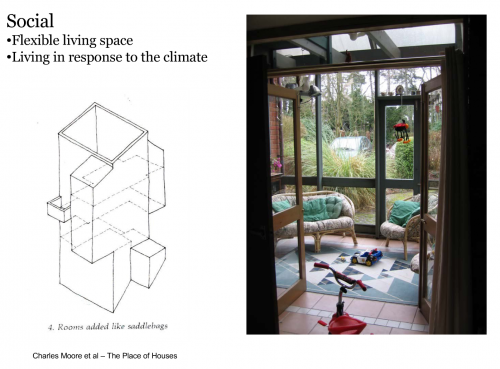 After the Stirling Prize was announced it explained to me one of the reasons that I, like the judges, had decided who should win. 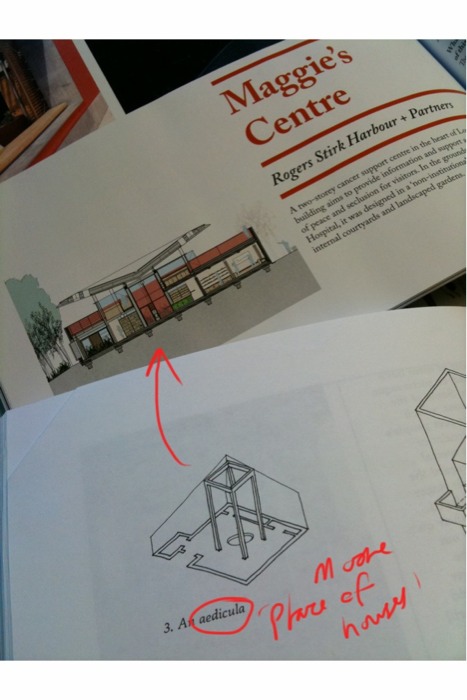 And with its words on ‘inhabiting’ in the closing chapter it found a new way to make me think about what I’d been trying to convey in past discussions about legibility and ownership.

The fundamental principle is that in places where people live all space should seem to belong to someone or something; space either should seem to be inhabited, as if it belonged to or could be claimed by particular groups of people, or should be understandable as part of a coherent larger order, such as the natural landscape or the traditional fabric of the town or system of altogether new urban spaces.

So if I get that all off my chest here on this blog then perhaps I can stop sounding like a broken record. I’ll be making no such promises over on home4self though, as I’ll no doubt need plenty of help from Moore and his colleagues to take the sketches you see there and work out the order of rooms, the order of machines and the order of dreams.