A rather off-topic post, but hopefully of value to some fellow parents… This is Josh. He’s ten years old. He can light up a rugby pitch, climb to about grade 5c/6a and strike a cricket ball with such Gower-like sublime beauty I get tearful. What he can’t do very well, or at least doesn’t really enjoy very much, is reading. This is far from unusual for us boys of course (many of us can’t be bothered with it until we’re in our teens as a rule) but with Josh it always seemed particularly unappealing to him. We didn’t let it worry us too much given that he is, like I said, a boy who on the whole prefers to be running and jumping rather than sitting and reading; but every once in a while I’d catch a glimpse of a look on his face when he was staring at a page that suggested there was more to it than that. Watching closely you’d catch a look in his eyes that suggested he was momentarily experiencing what’s probably best described as some weirdness, and for a split second he’d have to wait for the world to right itself again.

As you’ve probably guessed we’re now coming to the conclusion that he may be slightly dyslexic. Two separate tutors have raised it over the last year so we’re convinced enough to ask the school to look into it and in the next few weeks he’s going to be assessed by the local authority. It’s probably a quite mild case but it’ll be valuable to know if we need his upcoming secondary school to give further support.

This week I realised something about one of the few books he has enjoyed reading that I think is worth sharing publicly, hence the off-topic post here.

One of the only books he’s ever really enjoyed and enthusiastically read is the series by Jeff Kinney called Diary of a Wimpy Kid. At first I put it down to the fact that he was simultaneously enthused by the movie – we got him the first one after a trip to the cinema last year – but now I realise that it’s very likely the layout and the typeface that has made the difference. He got another for Christmas and once again he’s started reading without encouragement from us or protests from him. Looking through it with him a few days ago I suddenly clocked what had been staring me in the face for months: the handwritten font.

I think dyslexia is a little different for everyone, but one aspect of it is the way it can cause letters to appear mirrored. This gets particularly confusing with letters such as d and b which are easily mirrored on the vertical axis. The video from StudioStudio, designers of what seems to be one of the few specialist font projects in this field explains it further.

Here’s a page from Diary of a Wimpy Kid: 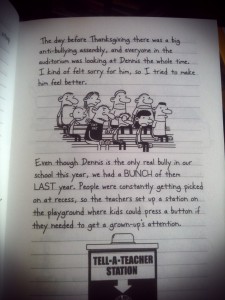 The varied angles of the handwritten font could very well be doing a great job of reducing the mirroring problem. Also, the notebook-like design with the line under each line of text combined with the page being broken up by sketches is probably dramatically improving his ability to keep track of each sentence.

Could it be that simple for someone with a mild case? A font choice and careful layout design? If so then the opportunity to explore this in modern eBook readers such as Kindles, Kobos or iPads seems ridiculously easy. An extensive investigation about Diary of a Wimpy Kid, fonts and ebooks (i.e. 30 to 40  seconds in Google) demonstrates two things: 1) that I’m not alone in noticing this but 2) that there’s surprisingly little comment about it.

I found a couple of mentions in some forums by people noticing how their dyslexic child enjoyed the book and also a blog post from August last year from a father who made the same connections and has seen results by combining a Kindle with an overlay; but beyond that there appears to be little debate.

With the appearance of beautifully crafted reading apps such as Readmill, the step from there to an additional visual setting designed to assist dyslexia sufferers is surely very small. It would simply (?) need some varied font choices of less perfect, more varied form (guaranteed to irk the purist typographers) combined with line by line support through a staged reveal or other visual aids and perhaps even some investigations into colour choices and brightness (such as those found in palettes like Solarized). An equally intensive investigation of the app store provides a few results regarding dyslexia but they appear to focus on diagnosis or spelling assistance, rather than just reading support.

So, if you’re an app developer and you fancy looking at this more, maybe we should have a chat? Better yet, if you actually know something about dyslexia and can put my armchair/googled understanding straight that would also be much appreciated.

In the meantime, there are things that can be done to test this further and craft something at home. In an hour or so over the weekend I’d managed to create Josh another book with a similar layout approach using Proboscis’ self-publishing system bookleteer.com, some text from Project Gutenberg, a font made from my own handwriting (made using Fontifier a few years ago) and some help from a certain Mr Kipling.

We can view the online version with an iPad or on a laptop, and after some quick folding I’ll be giving him the paper copy later today (PDF link – A3 format). 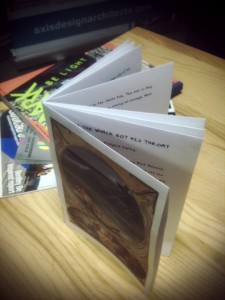 If he thinks there’s any discernible difference I think it’ll be worth pursuing further, although keeping his attention with only the classics available on Gutenberg could be tricky. Let’s hope someone in the publishing world looks into this further. We’ve yet to have the formal assessment so it’s possible the results will tell us he doesn’t have the condition at all, either way it’s pretty clear from his enthusiasm for the design of Diary of a Wimpy Kid that a more child-like approach to writing and design can make a big difference to child-like eyes.

One response to “dyslexia, eBooks and typography”