Notes made on the 22:30 from Euston to Birmingham, whilst returning home to the provinces after treating myself to an evening of presentations and discussion with Dan Hill, Jeremy Till and Wouter Vanstiphout under the title Institutionalised…

Housed in the Black Maria installation at St Martin’s by Richard Wentworth/GRUPPE we were split into eager registrants who’d secured a ‘seat’ and lazy laggards who just turned up to freeload by taking a chair outside the installation and behind the projection screen. Proceedings get underway with the barrier between us raised and the talk show hosts/guests in the middle, then at the appointed moment when sufficient teasing has taken place, the screen falls (to the sound of a jet aircraft landing) and we become the privileged few allowed sole rights to the speaker’s attention and slides that are the right way round, whilst the rest get only sound piped through speakers and reversed images and text. It’s a privilege that is later slightly sullied by the numbness of our arses as they complain about the unforgiving plywood steps we’re sitting on. The fact that Richard Wentworth himself chose to sit on the chairs outside should have told us something perhaps. 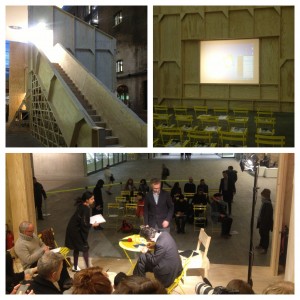 It’s a beautiful thing though, and perhaps the very embodiment of what would during the evening be discussed as the conflict between the teaching of craft and ethics. Carefully crafted as it is to disrupt the usual ethics of oratory; thereby straddling both concepts perfectly.

The evening is introduced by Shumi Bose and the speakers are described as one qualified architect (Till) and two people who inhabit the ‘extended field of architecture’ (Hill and Vanstiphout). It’s this extended field that is of course the primary focus for the evening and a topic ripe for exploration in the UK at the moment given the widely discussed/lamented state of the profession and it’s utter lack of direction or worth. How does a mindful awareness of this extended field allow architecture to work within, against or for institutions?

Here are some (crudely paraphrased) sound bites and notes from each:

1) provides a short intro and begins by reading the founding definition of the RIBA (quoted in his book Architecture Depends), part of which can be paraphrased thus: ‘architects are to be the arbiters of taste’ and he then states that this institute’s position is only legitimised by the support of other institutes i.e. universities.

2) he criticises architecture for becoming a spatial projection of imagination (or does he? see footnote)

3) acknowledging his position in the large institute of St Martin’s he describes himself as the institutional irritant that seeks to disrupts from within, but acknowledges that the more effective position may be on the outside

6) he proposes that the reason for this is in fact because architecture has merely become the visible garnish/figurehead/tip of the iceberg for the (massive) process of (brutal) urban renewal
beneath or behind it driven by institutions such as the state or the market.

7) underlining the power of the market he shows a picture of a city skyline filled with large buildings by internationally renowned architects, highlighting that their existence/creation is/was
dependent not on the people who inhabit them but the market that requires investment objects 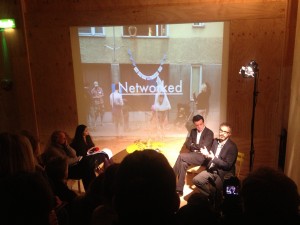 15) Dan suggests that the experience he’s had in three different organisations of different roles and scales could be described as inside, outside and (during his time at Sitra) at the boundary of key institutions

Each had touched on a question of position relative to the institution or institutions that determine one’s role. Jeremy began by questioning whether it’s better to disrupt from within or beyond, Wouter described the dangers of unwittingly becoming a figurehead for the institution behind you and Dan demonstrated what might be possible at the boundary between the two. I think these positions were further contextualised by comments during the discussion at the end of the evening when Wouter (expanding on his comments about market driven investment objects) questioned the possible conflict of loyalties between the direct source of funding from a client vs. the city in which the work is carried out. How do you maintain the balance between civic responsibility and client loyalty? Following that a question from a planner in the audience about the panel’s view on how the UK’s NPPF and debate on localism might impact the institution brought an acknowledgement of the value of the neighbourhood forum. In there somewhere there were also comments about the market of supply and demand that suggested that the profession concerns itself too much with the supply side, when in fact it should work harder to raise and support the demand.

Neighbourhoods – the demand market – are the boundaries to institutions in which an architect’s loyalties must be invested.

It’s fitting then that the following 24 hours of media coverage in the UK built environment has provided much coverage of a growing interest in the power of self build and co-housing ideas and it’s certainly helping me form ideas about which direction I’d like to head in future with my practice.

Finally, I’d like to end by recording a wonderfully succinct and compelling description of the perils of what Wouter described as the neo-liberal myth of the benefits of rolling back the state. Rather than the space left over being filled by the common man, it’s simply claimed by the private market instead.

* Note: I appear to have heard Jeremy’s comment on the projection of spatial imagination entirely differently to the fellow on my left, Charles Holland off of FAT who wrote it down properly: 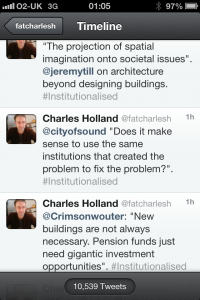 5 thoughts on “Institutionalised in the Black Maria”